Home How Connected Communities Work Is Strengthening the Community in Cary, NC 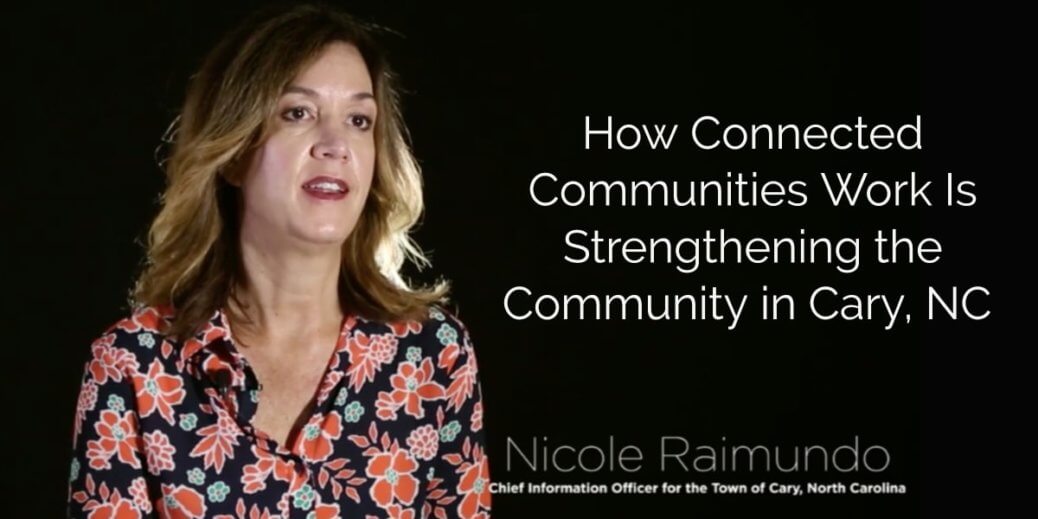 “Connected community is a broader term because it’s not just about the technology,” she says. “When you say smart cities, people start to talk specifically about technology when really you need to be putting the community as a center point.”

The town of Cary, NC is approaching #smartcities with a #connectedcommunities approach. @NRaimundo explains what it means and the importance of the #livinglab.

Cary is the second largest town in America, with a population of 166,000. Its unique location inside the research triangle park area of North Carolina has helped to accelerate its connected communities work. As an affluent area with highly educated people, the citizens are enthusiastic about the use of technology, and there are many private companies, non-profits, and educational institutions to partner with.

Connected Communities and Setting Up a Living Lab

One of the most important connected communities’ projects Nicole has worked on is creating a living lab inside the town. Everything on campus – including a community center, police department, IT and a little park – is representative of the town of Cary, just on a much smaller scale.

“I will say, I think people thought we were crazy,” says Nicole, as she reflects on the reactions she got when the living lab first started. “They didn’t understand what we were doing. As I think we all know, technology has just taken off so fast. A couple of years ago, it was in its infancy, and folks didn’t really quite get it.”

Flash forward a few years and some of the same people who were saying “Why are they doing this? Why are you spending all your time…” are now excited about adding new sensors and starting new pilots.

Why should other cities be interested in creating a living lab? Nicole says there are three main benefits.

The first is that it allows the city to test technologies on a smaller scale before deploying them in the city. For example, the town of Cary was exploring parking sensors and did a test of puck sensors buried in the ground. The pilot gave them time to experiment, and in the end, they decided these sensors aren’t what they want. “We’re building a brand new parking deck downtown, and that’s not the solution we’ll go with,” says Nicole.

Finally, a living lab is important for gaining valuable partnerships for connected communities endeavors. The town of Cary has been able to form many beneficial partnerships over the years, like those with non-profits such as NC RIoT, companies such as Cisco, and also educational institutions in the area.

“It’s a win-win for them and for us in terms of partnerships because they’re willing to help us learn and we’re willing to give them feedback on their products,” explains Nicole. In addition, companies are able to bring other clients in and see the products in action inside the living lab.

The work that Nicole and her team are doing in Cary exemplifies the concept of ‘connected communities’ – the use of technology to solve problems that will improve the lives of residents. Data from sensors is used to make more intelligent decisions and to create a stronger connection with the community.